What is a badminton shuttle and why do I care? 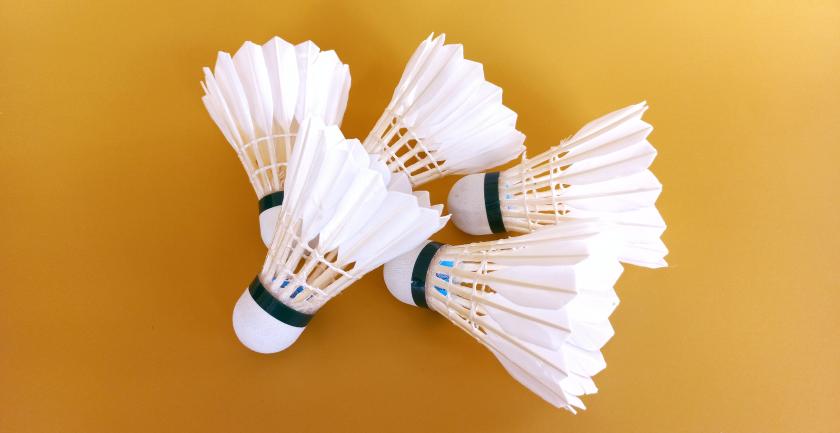 What is a shuttlecock?

Before we dive into specifics and why you should care about the shuttlecock you are using, let’s understand some basics.

Referred to variously as the “bird”, “birdie”, or simply shortened to “shuttle”, it plays the role of a ball in the game of Badminton.

In simple terms, the shuttlecock is the object that players send across the net to their opponents, and while a racquet is used to hit it, the shuttle is what players have to balance up in the air in order to win the game.

Let’s drop the formality now and call it the shuttle for the rest of the article. 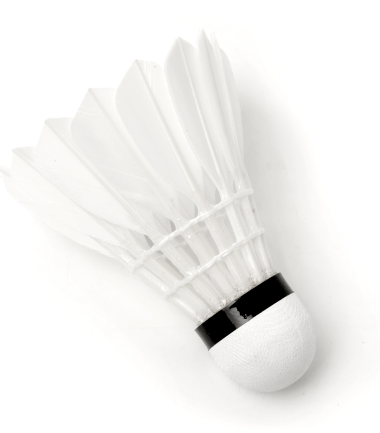 The existence of a shuttle can be traced back a few thousand years to China and a game whose name also translates to “shuttlecock”. The word “shuttle” refers to the back-and-forth motion of the game, while “cock” is a reference to the male bird, and specifically the feathers that help the shuttlecock fly through the air.

From China, the game spread to other South Asian countries, including Thailand and India. By the time it reached Europe, the name became “battledore” (referring to the racquet). Its association in the mid-19th century with the Duke of Beaufort’s residence, Badminton House in Gloucestershire, England gave the game its modern name, coinciding with a rise in popularity in Britain and India in the 1870s.

Over the years, the shuttle has been through many changes and much experimentation, but one thing has remained consistent – its shape. Historically, the shuttle was a small cork hemisphere with sixteen goose feathers attached and weighing about 0.17 ounces.

In the 1880s, the shuttle had a velvet covering with a cork base. Many extreme versions have been attempted, including the “experimental shuttle”, made from teased natural gut in 1935, as well as chicken feathers, which failed due to their inability to produce a good flight.

You can refer National Badminton Museum for the oldest shuttlecocks.

Since the 1930s and 1940s, shuttles have been made more consistently, with a cork base and goose or duck feathers bound with heavy cotton thread. A significant change came when double and triple stitching was introduced. The shuttlecocks are now stitched and glued to ensure no break-throughs happen. 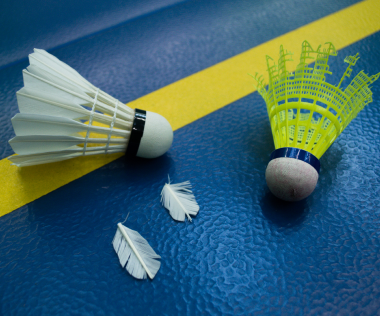 Real feather shuttles have been used for decades, but synthetic shuttles are now thought to be the future for the sport, since they offer a more eco-friendly alternative to the use of animals.

That said, the stability and fight quality of a feather shuttle is still far superior to its plastic counterpart, and while synthetic shuttles are much cheaper to produce, real feather shuttles are used at international level because of their quality and speed.

How are shuttles made?

Shuttles are widely available, but making one requires a lot of attention to detail. Conical in its overall shape, here are the specifications:

Working with real feathers when making shuttles is not a simple process. Feathers are fragile and if they are too dry, they break, so they go through a humidifying process to ensure they flex and last well during the game

Feather shuttles go into the box to ensure they fly in the manner they were designed, and that they last. Real shuttlecocks also have sponges that can be moistened and inserted into the feather end of the shuttle tube container to ensure the right weight of the shuttle.

So why should I care?

Think of any game where an object is propelled by something through the air, or across a two-dimensional surface. It might be a soccer ball “bent by Beckham”, starting its journey towards the crowd, but rising and curling sideways to reach the top corner of the goal. It might be a snooker player dispatching the cue ball to kiss the black in just the right spot to roll it gently over the cushioned precipice of the corner pocket.

Whether it’s a spinning pigskin following a giant arc from a quarterback’s arm to the hand of a sprinting wide receiver, a sliced Novak Djokovic serve, darting at right angles to the edge of the service box, or the perfectly weighted tap of an ice hockey puck that slides into just the right place for a slap shot to send it flying into the net, there is a common element at play – dynamics.

Dynamics, aka mathematics and physics, are what make a game interesting. It’s where the excitement comes from and where the skills are forged to make the unpredictable that bit more predictable.

The game of Badminton is no exception, having an undeniable relationship with mathematics and physics, particularly the trajectories of a shuttle, which follow Newton’s famous laws of motion.

The acceleration of a shuttlecock is governed by the downward force of gravity, and a drag force from the air that is proportional to the square of the shuttlecock’s speed through the air.

In simple terms, a shuttle doesn’t work like a tennis ball. The dynamics of a shuttle mean that no matter how hard you hit it, it will never go further than 6 or 7 metres.

Despite the limitation imposed by the laws of physics, Badminton is one of the fastest racquet sports in the world. Reaching speeds of up to 90.0 m/s (201 mph), a Badminton shuttle can travel faster than a Eurostar train at its maximum in-service speed of 83.3 m/s (186.4 mph).

With all these factors at play, choosing the right shuttle requires some thought.

So how do you choose the right shuttle?

The first thing to look at when buying a shuttle is the level you are playing at. Being an amateur or occasional player does not demand a high-quality shuttle, but if you are into intense or regular practice, you will need better, stronger shuttles. Sometimes real feather shuttles need to be replaced in the course of a day’s play, while synthetic shuttles tend to last much longer.

When buying shuttles, people generally focus on quality, but the speed of the shuttlecock also plays an important role. Here are some things to keep in mind in relation to speed: 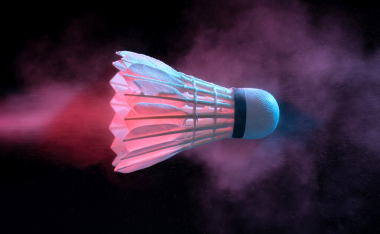 The speed of a shuttle is dependent on air density. If the total amount of air is comparatively low in an given area, it means it has a lower air density. In these conditions, a shuttle will have no problem travelling quickly. For example, if you live in a mountainous region with low air density, choose a slow speed, as this will compensate for the speed boost provided naturally by the geography of the area.

In hot weather, a shuttle travels faster. Conversely, when playing in a colder region, the shuttle speed is slower. If the temperature rises in a region, the air density reduces, thus making a slow shuttle more suitable. For the same reason, China uses a slower 76-speed shuttle during the summer months, but opts for a slightly faster 77-speed feather birdie in the winter months. Please refer to the shuttle label table below for more information on speed.

This is also related to air density. Generally, the higher the altitude, the faster the shuttle will move. For example, air density at altitude is lower compared to an area near sea level. If you are playing below sea level, the speed of the feather birdie will be even slower. So, you must choose according to the altitude of the area.

How are shuttles categorised? 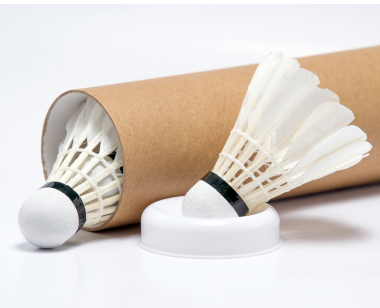 Traditionally, manufacturers used the weight of the shuttle to categorise them, with most shuttle tubes marked with numbers from 48 to 52. If a shuttle is rated as 50, for example, it means its weight is 5.0 grams. This, however, led to inaccuracies as it did not take into account the shuttle’s speed characteristics. Hence, the method was changed to make speed a differentiating factor. The speed of the shuttlecock lets a player know how fast and far it will go.

Just as coloured labels are used to differentiate nylon shuttles on the basis of speed, feather birdies come with numbers to help you identify their speed.

Here are what the different numbers on the tube of feather shuttlecocks mean:

As a general rule, consecutive speed ratings make a difference of 30 cm in distance travelled. Hence, if you buy a shuttle with a speed of 77, it will land 30 cm further than a feather birdie with a speed rated 76.

In Badminton, if the racquet is the heart of the game, the shuttle is its soul. Getting the right shuttle according to speed and atmospheric conditions can change your game.

We hope you enjoyed reading this article and will be back with you soon on advanced features with sports science and things to bear in mind especially when you are playing a tournament or championship.